The painter and illustrator, Archibald Elliot Haswell Miller (1887-1979), is especially known for his military portraits. His artworks can be found in the Imperial War Museum, London as well as in both The Hunterian Museum and Glasgow Museums and Art Galleries. To celebrate the opening of the David Livingstone Museum (David Livingstone Trust) in 1929, Miller was commissioned through donations from the societies and youth organizations that Livingstone had connections with to depict scenes of Livingstone’s early life in a collection of 8 paintings on canvas.

While the David Livingstone Birthplace is currently closed for refurbishment, behind the scenes a team of National Lottery Heritage Fund (NLHF) funded museum professionals, volunteers and students have been working to ensure the collection is protected and cared for. This extends to the conservation of the objects that will be on display, including one of Haswell Miller’s paintings, titled The Barred Door. The painting, predominantly executed with greenish and brownish tones, portrays a young David Livingstone locked out from his home, sleeping in the hallway. His mother looks on at him fondly, lighting the scene with a candle.

The artwork has undergone a remedial conservation treatment to ensure its preservation and to reverse damage that has occurred previously. An irregular layer of glue and bits of plaster on the reverse had resulted in deformations on the canvas, which, if not addressed, would have caused further deterioration of the artwork. A superficial layer of dust was removed first, before protecting the painted surface with a temporary facing. This enabled work to be carried out securely on the back of the canvas. Then, the old glue and plaster were removed by hand using a scalpel. Once cleaned, the painting was flattened down in stages, reducing the previous deformations.

To enable display, the painting was attached to a stretcher allowing it to be safely handled and mounted. To do so, strips of canvas have been adhered to the edges to stretch the painting and fix it into the new support. The temporary facing was then removed and the painting surface was ready to be cleaned and finally retouched. The conservation process has been executed by the conservator, Anna Marzemin, with reversible materials and following the ethical principles of art conservation: minimal intervention, reversibility and respect of the original artwork. The painting is now fully conserved and will be on display in the permanent exhibition of the David Livingstone Birthplace when we re-open. 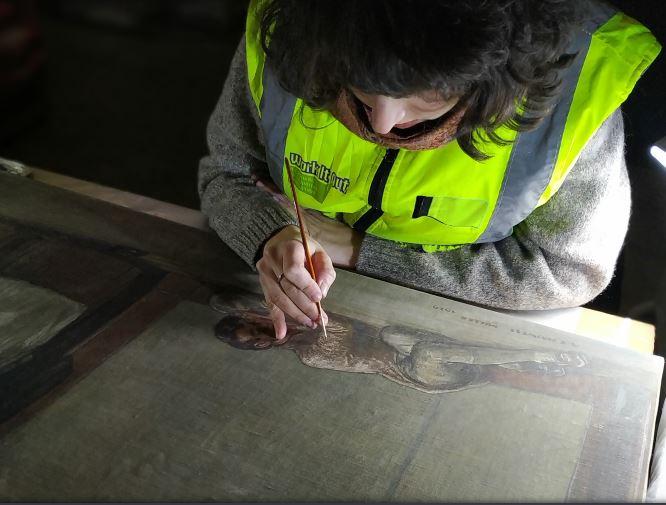